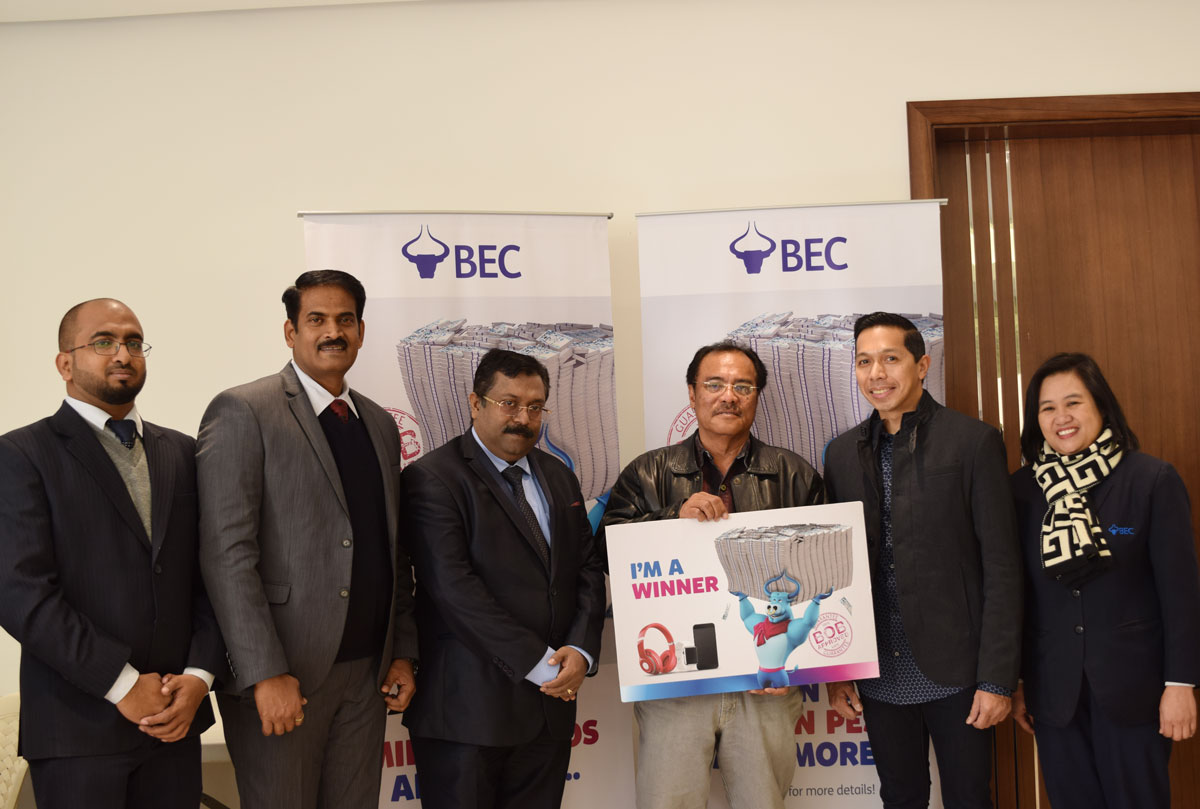 Bahrain Exchange Company (BEC), specialists in worldwide money transfers and foreign exchange, have announced today the winner of its ‘Million Pesos Campaign’, which had started in the first week of December. The campaign, which had been especially designed for the Filipino clientele, selected its Mega Prize winner yesterday. Mr. Elmer Mariano Jacalne from the Philippines was delighted to be chosen as the grand winner, and said, “I have been using the services of BEC since the last 15 years. I am thrilled and happy on wining a million Peso as this money will help me fund the higher education of my children. Thank you BEC.” He was handed the Million Peso prize money by Mr. Jabbar M. Adiong, Charge d’ Affaires of Philippine Embassy in Kuwait. Speaking on this occasion, he said, “It is great joy and pride to know that a Filipino engineer in the State of Kuwait is the lucky winner of a Million Peso from Bahrain Exchange Company (BEC). The Embassy thanks BEC for its continuous service to Filipino workers in the Gulf country. BEC’s remittance services have been of immense benefit to all of its clientele, including our modern day heroes, the OFWs. Congratulations to the winner and all the best BEC”.

Running from the 4th of December 2016 to the 28th of January 2017, customers who had transferred money to the Philippines, or exchanged currency to or from the Philippine Peso during the campaign period, had received an automatic entry into Bob’s weekly draw. Each week, seven lucky winners were randomly selected to win attractive prizes including iPhones, Apple watches, Beat headsets and many more. Further, every customer who had made a transaction was also included, by default, in the lucky draw for the mega prize.

The Million Peso campaign was aimed at making transactions cost effective and convenient for the Filipino patrons of the company, who responded positively to this campaign and participated wholeheartedly. The campaign was available at all of the 40+ branches of the BEC across Kuwait, as well as to customers transacting through the online money transfer service, BEC Online.

Commenting on the campaign, Mr. Mathews Varghese, BEC General Manager said, “the response to the ‘Million Peso campaign’ has been extremely positive from our customers and we are confident that this campaign will help to strengthen the relationship with customers sending money to the Philippines. We look forward to holding similar campaigns for our customers from other countries. With many competitors in our market, we recognize and appreciate the patronage that our customers show to the BEC, and will continue to complement their loyalty with exciting promotions and chances to win fantastic prizes.”

Bahrain Exchange Company (BEC) has been serving people for over 25 years, providing unparalleled money transfer and currency exchange services. It is a subsidiary of the BFC Group Holdings WLL, Bahrain, which is celebrating its centenary year in 2017. The company currently has over 40 branches across Kuwait and specialises in sending money around the globe safely and quickly, to over 40,000 locations in 30 countries, through its own money transfer product – EzRemit. Its global reach is extended to over 200 countries through its partnership with MoneyGram, an international remittance company.