BEC Gear Up For Motorcycle Bonanza 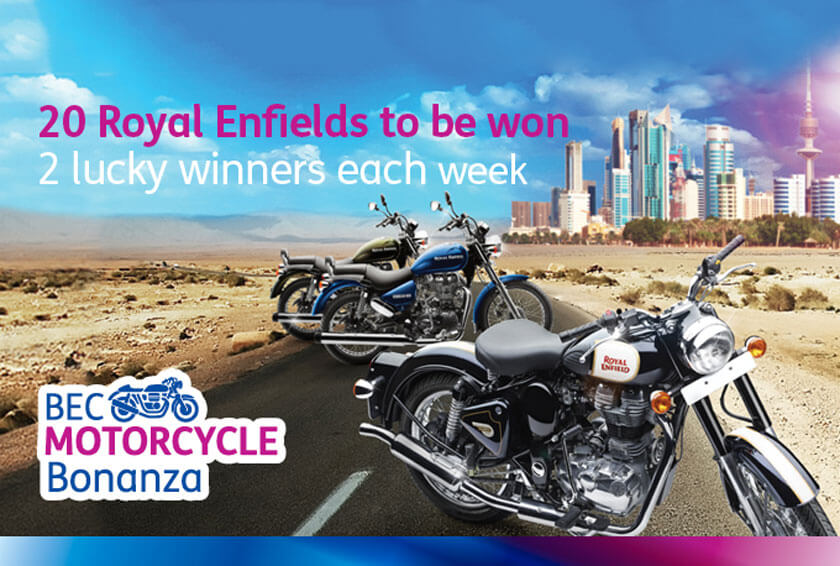 Customers that make a transaction between the 25th October and 2nd January 2016 will have the chance to win one of 20 Royal Enfield motorbikes.

The campaign is a first of its kind in Kuwait and is open to all BEC customers that make a money transfer or currency exchange transaction at one of BEC’s 35+ branches, or to customers that make an online money transfer through www.beconline.com.kw, during the campaign period. Two bikes will be given away each week, in 10 weekly draws, with customers automatically being entered into the weekly draw that they make a transaction.

Commenting on the new campaign, Mr. Mathews Varghese, General Manager of BEC said, “This promotion is in line with our ongoing strategy to reward customer loyalty and show our customers that we recognize their ongoing support. We are very excited to offer our deserving customers the opportunity to win such a popular and sought after prize and wish them all the best of luck.”

BEC currently has over 30 branches across Kuwait and specializes in sending money around the globe safely and quickly to over 54,000 locations in 30 countries through its own money transfer product – EzRemit. Its global reach is extended to over 200 countries through its partnership with MoneyGram an international remittance company.