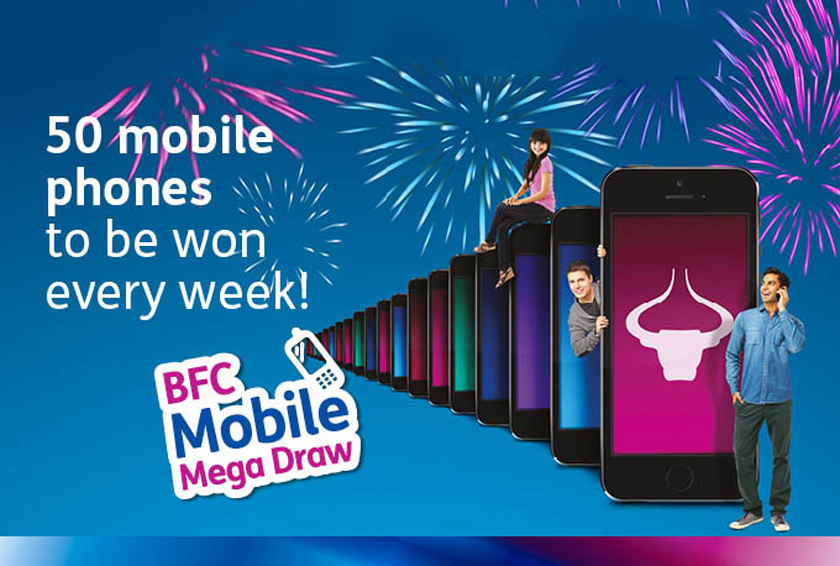 With 750 mobile phones to be won

Bahrain Financing Company (BFC), the Kingdom’s oldest and most reputed worldwide money transfer and foreign exchange group, today announced the start of its ‘BFC Mobile Mega Draw’ campaign. Starting from the 25th January and running until 9th May 2015, all BFC Bonus Loyalty Card holders that make a transaction within the campaign period will have the chance to win one of 750 mobile phones.

The Mobile Mega Draw campaign, BFC’s latest incentive for its BFC Bonus Loyalty Card customers to keep in touch with their loved ones in Bahrain or in their home countries, involves 15 weekly prize draws with 3 x iPhone 6 and 47 x Nokia 130 phones being given away each week. To enter the campaign for a chance to win one of the exciting prizes all customers have to do is make a foreign exchange, money transfer or BFC Smart Money transaction at one of BFC’s 40 branches across the Kingdom.

Commenting on the campaign, Mr. Kashif Khan, BFC’s newly appointed General Manager said, “We are delighted to start the New Year with a campaign that will give the opportunity for our customers loyal and new, to win up to 50 phones every week and to stay in touch with their loved ones. The more transactions a customer conducts in a given week, the better the chances to win – so good luck to all”

BFC currently has 40 branches across the Kingdom of Bahrain and specialises in sending money around the globe safely and quickly to over 44,000 locations in 30 countries through its own money transfer product – EzRemit. Its global reach is extended to over 200 countries through its partnership with MoneyGram an international remittance company. BFC is also one of the main providers of foreign currency exchange in Bahrain and customers can buy or sell foreign currency at the most competitive rates in the market from any of the BFC branches.